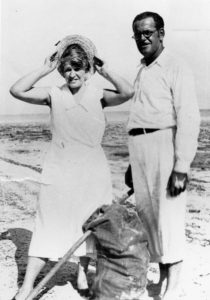 Ed and Fern Butters with a burlap sack filled with conch

The Butters paid little mind as news of a tropical disturbance spread through Islamorada on Sunday, September 1, 1935. Monday morning, Ed affixed the heavy hurricane shutters over the concrete windows of the Matecumbe Hotel and drove with Jack, his son, to Miami to spend time painting a boat before picking up supplies for the hotel.

The 1:30 p.m. report from the Weather Bureau caused Ed to step inside a Flagler Street hotel and call the hotel. When Fern answered the phone, he asked about the conditions. While convincing Ed that she did not think it was necessary for him to come home, the tenor in her voice changed. A gusting wind pried a shutter free from its hold and slammed it against the hotel. Startled, Fern said, “Well if you want to know the truth, it’s blowing like hell here.”

Unaccustomed to hearing strong language from his wife, Ed replied immediately, “I’m on my way.” Ed picked up Jack and hurried back to the Plymouth. At approximately 2:40 p.m., Fern informed the cook that supper for the hotel’s guests needed to be prepared and served by 4:30. Fern’s father-inlaw Charles Butters and her son-in-law Olin Perdue went outside to doublecheck the hotel’s hurricane preparations. Driving 80 mph, Ed arrived at approximately 4 p.m.

At 6 p.m., Ed ordered his family out of the hotel and into the Plymouth. Eight people climbed inside the car: Ed and Fern, their boys Jack and Chester, Ed’s father Charles Butters, daughter Loretta Perdue and her son Pete, and Mrs. L.A. Fritchmann, Ray Sheldon’s secretary. Ed backed the Plymouth against a tour bus.

“I never knew a howling, raging wind to come so fast,” Fern said. “At six o’clock, we were forced to leave the hotel. We heard crashing and noise from the hotel and a piece of the building blew down and landed beside the left front wheel of the car. We watched it anxiously, fearing it might blow into the car.”