At approximately 8:20 p.m., pieces of the hotel fell onto a fire truck that had been parked behind the hotel. The falling rubble caused the engine’s siren to sound. A few minutes later, with the wind howling and the siren wailing, 18- feet of tidal surge crashed over the Matecumbes. The car began filling with water. Outside, three employees from the hotel struggled through waist deep water to reach the car. There was no room. Ed decided everyone should make for the highest ground possible, the railroad embankment.

Ed put his youngest son on his shoulders and the others formed a human chain as they began making their way toward the tracks. Ed took a step, lost his balance, and stepped on a nail. Fern saw Ed falter and told him, “Ed, let’s stay together and get into that old bus.” The group weathered the hurricane inside the bus. 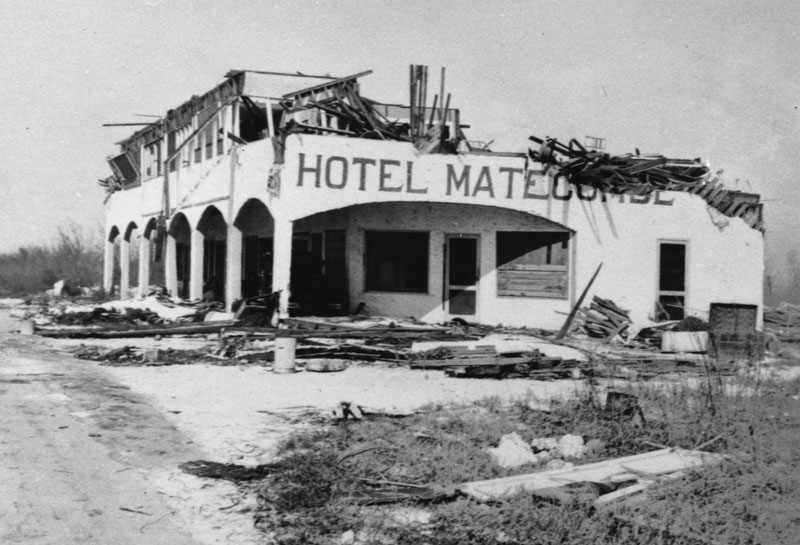 Remains of the Hotel Matecumbe

“The hotel sounded like it was going to fall apart,” Fern said. “The kitchen had exploded. We had constant flashes of sheet lightening, and all this with the wind howling like a banshee, the siren moaning, and water rising everywhere. You would have thought there would have been mass hysteria. Yet with everyone looking into the face of death, there were no hysterics. Everyone was quiet. We were all in a state of shock, I think. We started the five-mile trek to Snake Creek where a boat was waiting to take us across. When we reached the place where the boat was waiting, we had walked by the bodies of the dead and had recognized many. At the embankment there was a pile of bodies stacked up with a piece of canvas over them, but all of their feet were exposed, and so many were children’s feet that finally it was just too much for me. The last thing I remembered was falling toward the embankment. Someone must have caught me, for when I came to we were in the boat being taken across.”